Any time I hear the song “Can We Still Be Friends” by Todd Rundgren, I have two reactions. The first is a mild sort of revulsion. Not at the song itself, which is a pretty good pop song, but at the song’s message. I’m far more in the “We Can’t Be Friends” camp after a relationship tanks. 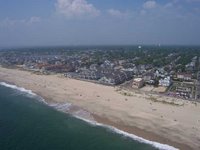 The second reaction, more a memory, is to recall summers visiting my Uncle B. in Point Pleasant, New Jersey: our annual trip to the Jersey shore. The reason this song sparks the memory is because the summer Todd Rundgren put out his Hermit of Mink Hollow album, my brother M. was playing the eight track of it to death in his car. Thus, everywhere we drove the summer of 1978, that album, and that song in particular, was playing. And the song sounds like a faded summer memory. I also get the same Point Pleasant vibe from “Down by the Seaside” by Led Zeppelin –M. was dogging Physical Graffiti, too, on his car’s eight track, and that song naturally stuck.

Coming down from the Coal Region of Pennsylvania, the Jersey shore was like another world – one that made us feel inferior. My brother J. and I had deep baseball and lawn-mowing tans. Meaning we spent so much time playing baseball and mowing lawns (for what was then a nice teenage profit) that you could see the distinct tan lines on our mid-biceps where our t-shirts ended – turkey-meat white above the line and bronze below it. Ditto our legs in terms of wearing shorts. We looked like dicks, at least compared to the completely-bronzed, always-blonde surfer dudes who were all over the beach. It seemed like all the kids were extras out of some Beach Boys video. And I envied those kids that all they seemed to do all summer long was surf, while we played ball and mowed lawns in the mountains.

I still get excited every time I lay eyes on the ocean, after not seeing it for months or years at a time. You’d be surprised how little you see it in New York City, unless you work on the southern tip of Manhattan or the far edge of Brooklyn. I walk over the 59th Street Bridge most Sundays and see the East River flowing into the sea, but it’s not the same. There’s just something about approaching a sandy beach head, walking up the wooden planks, then finally coming over the brim to see the ocean spread out infinitely in front of you, the waves rolling into shore, the sound of their crashing, the wind.

Seeing this every summer in my teenage years, it always felt like the first time. The only comparable vision I can recall is walking into Yankee Stadium for the first time in 1988, seeing the green of the field peeking out from the entrance rise, walking up it and seeing the entire stadium, complete with the gap in the right-center wall where the subway periodically crashes by.

At Point Pleasant, we’d immediately find a spot to put our towels then get into the water ASAP. Body surfing was the thing – not hard to do, and exciting when you got the knack. Many times, we got tumbled, swallowing that shitty-tasting salt water, getting bruised, losing our trunks and standing up dazed with our dicks hanging out. It was fun as hell and never got old. The surfers were usually down at the other end of the beach, and as noted, they had an attitude to boot. This was their turf, and they knew we were tourists. I don’t recall ever taking any shit from these kids, but they kept to themselves and vice-versa.

Dad always stayed back home in Pennsylvania. He never seemed comfortable anywhere past the county line, and I can only recall him coming down to Point Pleasant once. (I think this was because Dad had done so much traveling with the armed forces, including a decade after the close of World War II, that he was burned out on traveling anywhere by the time he was honorably discharged in the mid-1950s.) Mom would take us, although we didn’t feel really cool until M. was old enough to drive, and we could tool around playing Prog Rock on the eight track with our Cousin J., who was a rare friendly surfer. (For the record, he was heavily into KISS, Yes and Jethro Tull at the time, which seemed kind of silly then, but now seems cool as everyone and his brother was dogging Springsteen to death. I once asked J. how he felt about Springsteen, and he flat-out called him a dick.)

Mom burned easy, so she covered herself a lot, sat under an umbrella, and was content just to watch us having fun. I can see now that this is a parent’s right, and she must have been in heaven watching us cut loose like that. What really grated on me, then and now, is that while Mom was watching us, there was always a gaggle of middle-aged women disapprovingly watching Mom. They were the color of lobsters, and it occurs to me now that these were snobby New York City-area housewives who had beach houses in Point Pleasant, and thus got bronzed every summer. Doing nothing lying in the sun. While my Mom busted her ass taking care of four kids and was grateful to have a few days off. Even then, I knew enough that these women were looking down on Mom, Mom clearly sensed it, too, and I despised them. For some reason, it always seemed like the same four or five women, and may very well have been as we were using my Uncle B.’s pass to the private beach he worked during the summer.

For all my memories of beach insecurity, we always had a blast down there. Hitting the beach in the morning, coming back to Uncle B.’s place for lunch, heading out again for the afternoon, then coming back and using his cool outdoor shower to get clean for dinner – the smell of the sea in the air all the while. It seemed like our finger and toe nails grew exponentially while were down there, and we invariably got sunburned some time during the trip. There was constantly sand in our sneakers. You have to realize how cool this felt to a bunch of redneck kids who lived a good hundred miles from the ocean.

I haven’t been down there in years, although I know a few people who live in near-by towns: J. in Asbury Park and D. in Belmar, both just north of Point Pleasant. J. had a party last year to celebrate he and his wife E. getting a great new apartment in Asbury Park. That town is a story unto itself with its history of race riots and ruin. But throughout the 90’s, the north side of town became a haven for gay couples, many of whom set about refurbishing grand old seaside homes that had fallen into disrepair. That part of town now is gorgeous, like the quaint seaside town it no doubt once was, and it’s clear that the place is on the cusp of a serious come-back, after years of misfires and shoddy urban planning. And this is good, because everyone has the same reaction walking up and down the still gritty and under-developed boardwalk, and that’s: what the fuck happened here? Walking around that town now is like being in a John Sayles movie, where a large part of the town is still run-down, but turn the corner and there are signs everywhere of a big change about to occur.

J. walked a few of us down to the beach during his party, which was only about a 10 minutes away, and I got that feeling all over again, even though it was a cloudy day. That night, we could feel the sea breezes as we sat out on J’s patio listening to old country and cajun music. The sea is like home back in Pennsylvania in some ways to me now. I don’t spend enough time there, but when I do, I appreciate it and hold on to the good far more than the bad. Maybe it’s bullshit, but sometimes you need to bullshit yourself, especially living in a place like New York. Nothing wrong with open spaces, clean air and less assholes.