Before and After: 70s Hair Redux

Just got my hair cut on Saturday, at a nice barbershop I spied along Steinway Street just north of my gym on 30th Avenue in Astoria. Three guys, obviously an old Greek father and his two sons, charged me $11.00.

Which is great, as I’ve been going to a similar father/son barbershop set-up on 23rd Street and 8th Avenue in Manhattan, which I got turned onto by attending boxing classes on Saturdays with Kid Avila, at the gayest gym I’ve ever been in (on the same corner). One of my friends once tried to use the sauna there, and walked in on two guys jerking each other off. They glared at him as if he was making a faux pas, and he just walked out, making sure to tell the gym manager later. One of those ominous “Closed by Order of the New York City Health Department” signs was taped over the closed sauna door for the next few weeks, which happens periodically at every gym I’ve ever been in here. Life in New York City. That class dissolved a few years ago, due to the fact that all the guys in that part of town evacuate to Fire Island on summer weekends, thus leaving the gym empty, but I tend to go there once every 8-10 weeks when I get my hair cut. (And have never had an episode remotely like my friend had!)

But $11.00 is better than $16.00, which is what those guys have been charging. The old father cut my hair, he was a nice man, and I may keep going there as he did a good job. Before that barbershop on 23rd Street, I had been going to a guy running a shop in the subway on 57th and 8th, mainly for the novelty of it, but his prices were good. I stopped going when some asshole kid dropped his hat on the floor while getting into the barber chair. The barber glared at me and barked, “Pick it up,” pointing at the hat. “Buddy, that’s not my hat, and I don’t work here.” His eyes grow wide. “I don’t care! Pick it up!” Well, that was all the incentive I needed to pick my ass up and walk the hell out of there for good. All these old barbers in New York seem volatile, which is fine, but never, and I mean never, give a repeat customer shit like that. I don’t know what he was thinking.

At this point in my life, I’m glad to have hair. Believe me, some guys aren’t that lucky, and I guess when that happens, you just adjust your life to that new state and work with it. My hair doesn’t get long – it gets wide, much like Dad’s did. Dad had wiry hair that would have grown into dreadlocks if he hadn’t kept it closely cropped. Me, I just get shaggy – wiry enough that the hair stands up on its own, but not so much that I veer into jewfro territory. 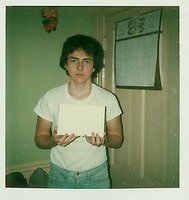 Since my hair never grows long, I’ve always made it a point to get sheered like a sheep when I go to the barber. Here’s a photo comparison of what my hair would like any time in the 70s before I had it cut. Unkempt, pointing at weird angles. Just plain old bad 70s hair. If I wore headphones, which I did all the time, the hair would conform to the shape of them, so I would look like I was wearing hair headphones. It was a pretty bad look, but I was far from alone, as most kids had these shaggy, combed-straight-down hair cuts, most of them much longer, usually supported by awful-looking peach-fuzz mustaches and sideburns. It got worse! 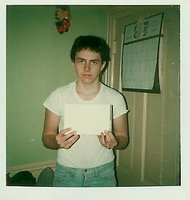 And here’s the after picture. It occurs to me now that people probably thought I was talking to Jesus in the form of a burning bush or family dog, and had symbolically chopped all my hair off to spiritually cleanse myself. This is how DeNiro had his hair in Taxi Driver before he got the mohawk. It was a pretty heavy departure – I usually only got my hair cut three times a year (I do it around six now and tend to keep my hair short all the time).

I would take a lot of crap at school. But not as much as I’d give to my friend Tony, who would follow the same hair pattern, only receiving a Prince Valiant/Moe Howard-style bowl cut every few months. I used to drive him to the point of kicking my ass by running Three Stooges riffs on him all day – like making that Curly “woob-woob-woob” sound, or singing “The Alphabet Song” (Bah-Ay-Bay, Bay-Ee-Bee, Bay-Aye-Bippie-Bye, Bippie-Bye-Bo-Boo), or doing that freaky snapping fingers/hand waving thing Curly would to Moe before getting poked in the eyes.

Old and Young Leo were our barbers back then. From what I understand, Young Leo is still doing it, although Young Leo is now in his late 60s and working only a few days a week. Both of them were classic barbers who would give crying little boys lollipops and have copies of the Policeman’s Gazette, The American Legion magazine and comic books as reading material.

It never mattered what you told either of them – they’d always give the same high-and-tight crew cut. I had one infamous cut in my teens where Old Leo actually shaved spots into the side of my head, inadvertently giving me a very cool punk cut. I couldn’t believe it. While all my friends were laughing and calling me Johnny Rotten, I was a bit mortified that he had gone beyond the normal military cut and must have accidentally pressed the electric clipper all the way through to the skin. Kids would often playfully taunt someone about “getting their ears moved” or “getting run over by a lawn mower.” But usually one of Leo’s cuts would have kids asking me when I was shipping out to Paris Island.

Still, no matter how box-headed I looked afterwards, I was grateful that I wouldn’t have to go back again for months. Besides, after a week or two, the hair would grow back enough that it wasn’t such an ordeal. I have the same values now, not going so far as a crew cut, but always getting a noticeably short cut. I don’t quite understand how guys don’t do this, how some go to a hairdresser and barely receive any sort of hair cut. I like a little more variety as opposed to looking the same all the time, although I pull up well short of hair dying, as I learned well enough early on that constantly fucking with one’s hair color could lead to thinning hair or baldness.

A shaved head? Hell, no. Most white guys look like total idiots with shaved heads – it must be something about the facial features that just don’t mesh. My brother J tried this once, and people kept asking him if the brain surgery was successful – it really did look as if he had been operated on. If he stuck a light bulb in his mouth, he could have worked a pretty funny Uncle Fester riff. Besides, it's a pretty rare guy who doesn't shave his head to cover some form of male pattern baldness. (If my hair ever falls out on top, I'll go with the closely-cropped on the sides look. And never, repeat NEVER, give into the short pony-tail-in-the-back-where-my-hair-is-still-long look favored by bikers and lawyers. This looks has "asshole of the universe" written all over it, the absolute worst hairstyle anyone can have.)

Ditto facial hair. Tried growing a beard once, and my face felt like it had a permanent rash after two weeks, just couldn’t take the constant itching. Some guys do look better with beards, just don’t think I’d be one of them. And it’s a rare guy who looks good with just a mustache. Most guys with mustaches look like off-duty cops or simply like half-assed weirdoes. As for soul patches, goatees and sideburns without mustaches, I suspect guys sporting these looks simply couldn’t afford or don’t want tattoos and think these “unconventional” facial hair styles are going to intimidate people. Guess again. Only way some guy is going to intimidate me is by shaving his head AND having mutton chop side burns. That look says “leave me alone” – and I would leave you very much alone, and in fact, may leave the immediate environment around you, never to return.

I don’t really fret too much about my hair. So long as I have it, and can get it righteously cut every few months, I feel all right. Even if that wasn’t the case, I suspect I’d just pick up the ball and run with it, whatever the look. Plenty of bald guys do all right with what they got, figuring out a look that suits them. Ditto gray-haired guys, which we’ll all be one day. As for now, I feel much lighter and liberated every time I climb out of that barber chair with a ton of hair on the floor for one of the sons to sweep up. No tears or lollipops necessary. Nothing like a good hair cut to feel some sort of minor rebirth.