The Lonesome Death of Sean Costello

Last week was rough for semi-famous musicians, with long-time Springsteen sideman Danny Federici succumbing to melanoma at the age of 58. Federici always seemed like working-class Jersey personified: at first a long-haired, mustachioed guy with an accordion and permanent swing-shift scowl on his face. As he aged, he took on that Italian Jersey look, gruff and no-nonsense, cut his hair, filled out. His organ playing on songs like “Hungry Heart” and “Racing in the Street” are signatures of each as much as the melody or lyrics – there are a lot of songs in the Boss’ canon that have his stamp on them. 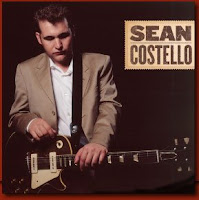 But the death that shook me up more was of someone you may not have heard of: Sean Costello. He was one of these blues wunderkinds, starting his career in his late teens, putting out a handful of albums in his 20s, each growing in terms of his style and talent, when he died a bluesman’s death, alone in his room at the Cheshire Motor Inn in Atlanta, the night before his 29th birthday. (For every hard-living, tattooed bozo out there who’s muttered the short-sighted “won’t live to see 30" line … and is now gazing in the mirror at a 59-year-old looking 40-year-old with a rubble-strewn life … I guess this is how it’s really done.) No cause of death noted yet, but you can figure on some type of misadventure.

He died alone, as every one of us will. Don’t ever let anyone tell you any different. From what I saw of Dad’s last days in a hospital bed, death will be like someone throwing a sheet over your head and hitting you with a shovel. Not some poignant, elegant farewell to heroes where all issues are resolved and everyone sheds a sentimental tear and sigh. Like most elemental things in life, it’s hard as hell, much harder than you anticipated, and there’s never any sense of resolution for the living. That’s fairy tale and movie shit, the soldier clutching his mortally wounded buddy whose dying words invoke heartfelt, perfectly-scripted promises to Mom and Peggy back home. Like love, or birth, it tends to be a fucking mess. But ultimately one of the most human things you’ll experience. You sense the finality of death, and the total lack of finality surrounding it.

I can tell you how alone Sean Costello died, call it the 21st century version of a bluesman’s funeral. I went on the web to seek out live material on various torrent sites. (Via Emusic, I already have a good dozen or so tracks from his various studio albums. In all honesty, I’m not a huge fan. A lot of his earlier material had that rote blues feel that I’ve never been enamored of, but you could hear him growing with each album, and learning how to write his own songs. I also gather the guy made a lot more sense live, which is often the case with the blues.) When I went looking for live/bootleg material, I only found a trace on a live music site, two fairly recent shows. The one I chose to download as a torrent, there were two seeders and two leeches. If you want an idea of how lonely that feels, pick a torrent for a current Top 40 act, and you’ll find hundreds of seeders and leeches sharing the material. The death of any recording artist tends to spark a flurry of activity on the web regarding his work. This was a Potters Field burial for Sean Costello, which I suspect he may have preferred.

The taper’s notes that came with the torrent of his show from January 26, 2008 at the Helen Stairs Theater in Sanford, Florida says it all: “The show was moderately attended by a mostly older audience.”

I did a quick Google Search on the Cheshire Motor Inn in Atlanta and came up with the following customer comments:

“If cruising is your thing then this is the place for you. There are 3 buildings but they've never offered to put me up in the ‘cottages’ and its just as well. If you are looking for discretion and privacy then choose the back building.”

“This place is the worst hotel or whatever it is! The drawers were filled with roaches! The closet was filled with urine smell. Which reek throughout! Disgusting and despicable! No one should enter! I would not let my dog lay on this floor.”

“No, the Cheshire is not the Ritz. But it is not marketed as the Ritz. It is also not a place to take children. Furthermore, this area of Atlanta has nothing that is geared toward children To me, this is a good thing.”

“Small roaches in the bathroom but I could have lived with that. This place is a cruise area for gay men. The curtains at the front window would only close with about a 1/4 inch gap remaining. Men would go by the window and peek in all night long. One man actually knocked on my door while I was asleep and asked if I wanted company. I advised him no and then he told me about this being a "gay cruise area.’”

“I stayed there the weekend of February 20, 2004. Two friends, both male, were in the room adjacent. That Saturday morning, a heavily tattooed man with multiple earrings and a nosering walked right into their open door. First he asked to borrow a pen. Then he asked if they would like some ‘southern hospitality’ (his words). When they politely declined, he repeated the offer.”

It sounds like the Cheshire was the perfect place for a bluesman to hang his hat for a few nights before hitting the road for the next show. You can paint his death as depressing, but, Christ, while he surely died too young, it sounded like he died doing exactly what he wanted to do. He could afford to make a living with music, he was traveling, putting out music on small labels where he obviously had total creative control, more famous musicians were playing with and seeing him all along the way …

… and sometimes when you pull back the curtain on that way of life, you’re at the Cheshire Motor Inn at 3:00 am with a roving bear in assless leather pants outside your door asking if you’d want a little “southern hospitality.” Not quite as dramatic as Stevie Ray Vaughan’s helicopter flying into the side of a mountain in Wisconsin, but I’m willing to bet scores of bluesmen have gone the way of Costello, albeit much later in life.

Again, I was shocked that his death has registered nary a blip on the web. I checked The Hype Machine website, figuring there had to be at least one person out there among all those music bloggers who wanted to honor the man with a tribute and some free MP3s. Not one. Not even a previous mention. You get nothing when you type in his name. The Hype Machine pretty much is what it says it is: geared to hyping mostly indie bands, who invariably sound like half-assed versions of The Talking Heads and Joy Division, while some white kid who's been to college raves about the band as if the wheel has just been reinvented. The writing and limited senses of taste and musical history actually makes me miss music critics, which is a tall fucking order. Emusic has the same bullshit going on: go to any hyped new indie artist on there, and you’ll find endless gushing commentary and four-star reviews … of stuff that wouldn’t have cut it in the early 80s, which is the exact musical time period most of these bands long to emulate these days.

Meanwhile, guys like Sean Costello fall through the cracks, when he was a consummate blues guitarist with a steadily growing fan base and reputation. I suspect had he not gone too far down a very bad hole the other night, he would have found his way to the jam band circuit, or at least should have in terms of playing to larger audiences. He’d have surely gone on to write more of his own material and shape his sound more clearly. My favorite track is his studio version of “Simple Twist of Fate,” with his solos sounding like the exact shading Robbie Robertson would have added to the track.

Since it feels like I’m standing here all alone, while a stray dog pisses on the mound of dirt in Potters Field where Sean Costello now rests, I’ll send him off with two live tracks from that January show in Florida. If you're impatient, hang in there for the extended solos, and you’ll hear why his passing deserves more attention than it’s receiving. The man could play.

Very well said, William. I tell anyone who'll listen (and some who won't ;-)) about Sean Costello and what a loss his death was to the world. What makes it all the more sad is the fact I was emailing Sean a few months before his death about possibly coming to the UK for some shows I could arrange and he seemed buoyed up by the idea of a change of scene. He asked me if I knew any bands over here that needed a guitarist who would work for an honest wage! Nowadays, I give Sean Costello's music to like-minded music fans I meet, whenever I get the chance (I often insist!). Good on you for writing such a piece. It IS a great loss, only most people don't even know it. All the best, Simon Maher, Salisbury, UK.

Wow, this was great.

I only recently discovered Sean Costello, like a year after his death. I am absolutely enamored with his music. It's a shame that he isn't so regarded by folks; that he slipped through the cracks.

His music really gets down into my marrow. I don't know why, it just does.

I think it is a shame he isn't more broadly known; it's a shame no one listens to the blues anymore, either.

Also: you are correct, Hype Machine is full of hype and no substance.

Sean Costello was so amazing, he would be up there with Bonamassa if it wasnt for his sad death :(

Apparently he died in that awful hotel room. I have no idea where Sean Costello is buried. At the time the article was written, one day shy of nine years ago today, it seemed like not a lot of people knew or cared who he was -- or at least he deserved a much larger audience. I was using "potter's field" in the figurative sense that his death deserved more attention.

That's quite a tombstone! Thanks for the reminder, was just listening to "Simple Twist of Fate" last week.